Skip to content
Home > DJs and DJing > Why do DJs lick their fingers? 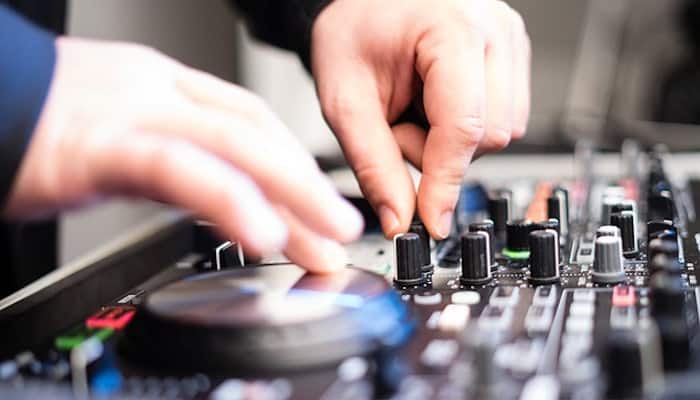 (When you buy through links on our site, we may earn an affiliate commission.)

If you have ever been to a club and observed a DJ at work, you’re probably asking yourself the following question:  Why do DJs lick their fingers?  I was wondering the same thing so I decided to do some research to find the answer.

Keep reading for more finger-licking trivia and how to stop this disgusting habit!

Why do people lick their fingers before turning a page?

If someone has very dry hands, they will struggle to turn the page of a book. With dry fingers, their fingers will slip across the page, forcing them to apply more pressure which will probably result in them turning several pages at a time! Eventually, they will give up and resort to licking their fingers.

After a while, for some people, it becomes a habit or even a ritual! They will lick their fingers before even trying to turn a page without doing so.  Often the person won’t even realize they’re doing it. It’s kind of like when people automatically add salt and pepper to their food before even tasting it. It’s just a learned response to a stimulus.

Other reasons people lick their fingers

Counting money is a common one. You often see bank tellers, cashiers, store owners or even just “normal people” licking their fingers before counting a pile of banknotes.  Again, people do this to get a better grip on each banknote. – It’s similar to why people do it when turning pages in a book or newspaper.

While eating or after eating

Some people often lick their fingers to clean them when eating with their hands. This is often when the food they’re eating is particularly messy or greasy foods like burgers, fries, potato chips, hotdogs and pizza.

This obviously has nothing to increasing their grip on the food! No, it’s done to try to clean off the grease, crumbs, ketchup etc from the tips of their fingers so that they don’t dirty their clothes or other surfaces.

I’m not entirely sure why people do this because napkins are a much more efficient way to clean your fingers and most places that sell food also provide paper napkins.

Is licking your fingers unhygienic?

The short answer is YES! It’s unhygienic not only for the person doing it, but also for other people.

Let’s come back to the example of the person who licks their fingers before counting banknotes. Think about the huge number of people who will have handled that money. Do you think they all have clean hands? Do you think their pockets, wallets and purses are clean? The average used banknote is covered in germs and bacteria. So the person who picks up a stack of banknotes and then licks their fingers is essentially putting all those germs into their mouths! Ewwww! Are you serious? Really? Disgusting right?

Not only that, the person licking their fingers is also transferring all their germs on to those banknotes, making them even dirtier and more disgusting for the next person.

It’s the same thing with the DJ repeatedly licking his/her fingers before touching his/her records. Those records weren’t clean to start with and certainly won’t be clean after he/she has put his/her saliva all over them!

People licking their fingers while eating food while is probably the most disgusting. Firstly, they probably haven’t washed their hands before eating a burger, so right off the bat their hands are full of germs. They then eat food with their dirty hands and actually put their dirty fingers into their mouth to “clean” them!  The irony here is that they do this to try to be clean but there is nothing clean about putting your fingers into your mouth and licking them!

While eating, they’ll also be touching things like the table, their chair, scratching their nose, touching their phone, counting their change. They then take another bite of their food before licking their fingers AGAIN! Yuck!

Another situation when licking your fingers while eating is particularly disgusting is when a group of people are helping themselves from the same food. Story time – I was at an office party a few years ago and there was a buffet table with bowls of peanuts and potato chips. Anyway, there was this one guy who was grabbing huge handfuls of peanuts, stuffing them into his mouth, licking his fingers and then going back and grabbing more peanuts with the fingers that he had just had in his mouth.  So now the peanuts in the bowl have been touched by his licked hands. Not good.

Is licking your fingers bad manners?

Let me make a confession. I used to lick my fingers when turning pages in books.  I didn’t think it was a big deal until my girlfriend at the time called me out on it!

She was a Latin teacher. She had a huge collection of books and she loved reading. One day at her apartment, while waiting for her to get ready, I took a book from her bookshelf and started reading it, casually licking my finger and thumb to turn each page.   “WHAT THE ***** ARE YOU DOING?” I think were her exact words, as she snatched the book from me and put it back on her shelf. She then went on to accuse me of being rude and not respecting her belongings. She was right of course. I hadn’t even thought of it like that. I apologized but the damage was done and we eventually broke up a few weeks later. 😢

So is it bad etiquette? Well it depends on who you’re with! My girlfriend definitely thought so! It’s other people who will judge you. Some people won’t mind and others will be disgusted by it.  In general though, I would say “yes” it’s bad manners and bad etiquette. Don’t do it.

How to stop licking your fingers?

After my girlfriend broke up with me, I realized I had to change my ways!

After some research, I found some solutions to increase grip without licking your fingers:

I found SortKwik  – It’s a kind of special cream you apply to your fingertips to increase grip. Each application lasts a long time so you only need a small amount. It’s perfectly safe, it doesn’t stain and of course it’s very hygienic because you’ll never have to lick your fingers again!

Another possible solution is to use a rubber finger tip  – They act as a protective barrier between your fingers and whatever it is you’re holding. They’re perfect for sorting through files, counting and handling papers and banknotes.

My solution after my girlfriend broke up with me was to stop buying physical books altogether! I have since invested in a Kindle and I now store hundreds of books in digital format. No pages = no licking  = no arguments!

If you lick fingers while eating, then my only advice is just STOP! A couple of minutes of planning should do the trick –  Make sure you have napkins, paper towels or hand wipes on the table or close to you before you actually start eating. That way, you won’t have to be fumbling around for them and so you won’t be tempted to be lazy and lick your fingers instead.

Do you know someone who licks their fingers?

Have a rant. Get it off your chest. Tell me the story.

Tell me in the comments below and share this post with any finger-lickers that you know! We must educate them!

3 thoughts on “Why do DJs lick their fingers?”

As an Amazon Associate, I earn from qualifying purchases.

Additionally, MyAudioPlanet.com participates in other affiliate programs, and we sometimes get a commission from purchases made through our links.