Skip to content
Home > DJs and DJing > Why do bands hate DJs? 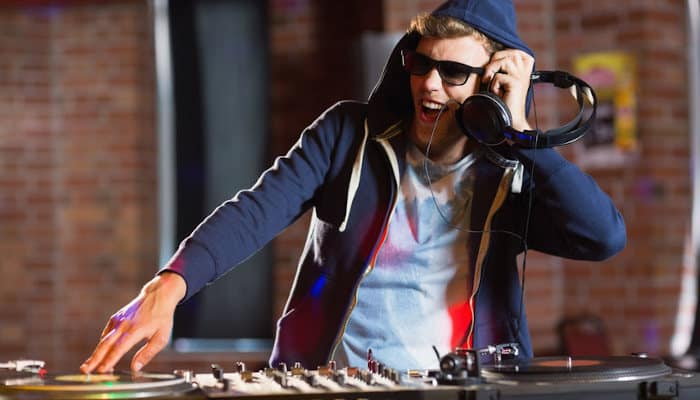 I really don’t like to generalize, but anyone who is involved in the music or entertainment industry will be well aware that many bands and musicians have a strong dislike for DJs. Many bands go even further and admit that they actually hate DJs.

I have known this for years but never really understood all the reasons so I decided to do some research.  In this article, I present my findings as to why bands hate DJs.

In the interests of balance, I also look at the counter argument and come to the defense of DJs at the end of the article.

If we look back in history, in the USA and Europe, the rift between bands and DJs started in the 1960s / 1970s. Before that date, nearly all the music in bars and clubs was provided by live bands. People wanted to see, hear and dance to live music. Many bands were needed to fill all the available sets for all nights of the week in all of the clubs. Furthermore, many of the bands at the time were big bands with a wide range of instruments, percussion, backing singers etc. There was therefore plenty of work for musicians.

This was great for the musicians of course but it was a big expense for the clubs paying them.  When club owners discovered that they could have music in their clubs provided by one person (a DJ) instead of upwards of four band members, the tides started to turn and more and more bands were replaced by DJs.

Money talks! At the end of the day, bars and clubs are a business and owners want to maximize profits. Since each band member needed to earn a living wage, a band of 5 people cost a club owner way more than the cost of a single DJ. The club owners chose the cheaper option of a DJ and the bands resented them for it.

When you know and understand this history, it’s easy to understand where the tension between bands and DJs comes from!  Here we are, over 50 years later and it appears those negative feelings are still alive and have been passed down the generations.

When you ask bands today why they don’t like DJs, here are some of the other reasons they give:

DJing is easy and requires no talent

Put yourselves in the shoes of a musician. A musician spends years learning the theory of music (pitch, scales, rhythm, melody, chords, harmony etc) and then must learn to play an instrument or learn to sing.  When musicians form a band, they must then learn to play hundreds of songs and keep learning new ones because many of the older ones will no longer be in demand. All of that requires a huge amount of work, talent and time.

In comparison, a DJ can play any song by any band at a moment’s notice without any practice. What took years of work and practice for a band takes a few seconds for a DJ.  You can see why that is going to annoy the original artists!

Some DJs are really bad

This is mainly due to the advent of new digital technology that has significantly made it easier and cheaper to be a “DJ” than it was in the past.  Now, you’ve got kids who have an entire collection of illegal (downloaded for free) music in MP3 format on their laptops. They then install some software on their laptop, buy a controller and a pair of powered speakers and hey, they’re a DJ!

All they’re doing is cross fading and playing songs with little understanding of music theory, music production or even sound engineering to create a good sound. Owning the tools and technology doesn’t mean they know how to use it properly.

I think even good DJs (and there are plenty of good ones) have a dislike for these cowboy DJs.

If I buy an NHL shirt and hockey stick am I now a “hockey player”?!

It reminds me of how the advent of new technology has affected other professions. The invention of the digital camera in the 1990s resulted in a huge increase of people claiming they are “photographers”.  The cost of processing film and printing is no longer an issue. Anyone can now put a memory card in a camera and take hundreds of photos of a wedding at no cost and then sell the 20-30 shots that actually come out ok! These “photographers” have no understanding of light, composition or any artistic skills. Owning a camera doesn’t make you a professional photographer.

Coming back to DJs, here are the skills that a good DJ should have:

The problem is that many DJs don’t have those skills. Let’s look at that last one in a bit more detail:

Many DJs have no understanding of live sound

The problem again is due to the lack of training in music theory and to the way in which many DJs learn their craft.  – As mentioned above, many so-called DJs have no musical training and learned to mix records in their bedroom using a laptop and a controller. None of that helps him/her understand live sound in a club or even bar environment.

In a club, DJs are tucked away in a DJ booth. This is probably the worst place to hear what the sound is really like for the customers in the club, especially the ones on the dance floor.  – The speakers closest to you are probably facing in the opposite direction and the speakers furthest away from you at the back of the club are really far away and there will therefore be a lag between what you’re doing in the DJ booth and what you can hear.

The solution to this is what’s known as the “booth monitor” – An output from the controller or mixer to speakers placed in the booth. The problem is that the booth monitor sound is very different to what the clubbers hear on the house PA.  The sound in the booth could be fine but the “real” sound in the club could be actually distorting!

A good DJ will know this of course and be able to adjust for it and optimize the sound for the dance floor. But the average DJ will be completely oblivious and the result is terrible sound quality.

It’s all about the money

Musicians feel that the record-playing DJs are taking money away from the real artists who made the music in the first place. There would be no DJs without musicians. DJs need musicians but the opposite is not the case.

Band members spend years learning to play instruments and to sing primarily because the love music. They feel they have paid their dues and deserve to be paid. DJs on the other hand are making money off the backs of their work without having to put in the same amount of work.

The reason for this is of course due to basic economics. A bar or club owner has an entertainment budget that he/she is willing to spend in order to get customers into the club and buying drinks.  The bar/club owner doesn’t care about musical talent or creativity or how long it takes to learn an instrument. He wants to get customers through the doors and spending money at the bar. If a band is going to cost him more than a DJ but not result in more revenue, then he’s going to hire the DJ instead. He’d be stupid not to.

Some DJs are very talented

There are lots of different types of DJ – There are mobile DJs, wedding DJs, bar and club DJs, adult bar DJs, radio DJs and more. For many of them, the main role is to play records and they’re the main ones that bands have a problem with because they feel they’re taking work away from them.

There is however type of type of DJ who are also producers and they do have talent and musical skills. Many of them prefer the term “turntablist” to “DJ” in an attempt to distance themselves from the record-playing DJs mentioned above. These turntablist DJs mix, manipulate, arrange existing music and scratch to make something original. They have genuine talent. A good example would be DJ Babu.

There are some sounds and songs that can only be made with scratching. You can’t create that music with other instruments like a guitar, or drums. That’s not copying and that’s not playing other people’s music. That’s production of original music.

DJs are musicians too

Bands often accuse DJs of not being “musicians”. But they seem to think that the only way you can be a musician is to play an instrument but that’s not really true. It can be argued that the definition of being a musician is making music in whatever way you can. A skilled turntablist DJ who can seamlessly mix records and scratch is still a musician.

There is some misconception that all DJs do is press “play”. That’s like saying all drummers do is hit a drum with 2 pieces of wood!

DJing is a lot harder than people think. It requires a good ear for music, the ability to read a crowd and plenty of creativity to edit your own mixes. A lot of planning goes into it that most people never see.

There’s more to it than just playing records. It takes a lot of skill to choose two records that work together rhythmically and tonally and that work well on the dance floor.

DJs are good at reading the crowd

One area where DJs are very skilled is their ability to read a crowd’s energy and to adapt to it by playing the right type of music to keep them entertained.  DJs are very flexible and versatile.

It has been my experience that many DJs have a much better understanding of why they’ve been hired – to make money for the bar/club. No more no less. Using this understanding, they organize their sets to maximize drinks sales.  I’ve seen it first hand. Back in the day, I was in a club that my friend was DJing at. He came over to me and said “Watch this – in 10 minutes from now, they’ll all be at the bar”.  He then proceeded to play 3 songs starting with a high energy dance track and finishing up with a low energy slow track. Immediately, the dance floor cleared and lines formed at the bar to replenish their drinks! It was pretty impressive to watch. Bands on the other hand seem to base all decisions on the musical aspects, not the commercial side of things. They judge their success on the applause at the end of the night. Most DJs don’t care about applause. They care about drinks sales because that’s what determines if they’ll be invited back next week.

Putting aside the financial aspect and the fact that DJs often cost less than hiring a whole band, many customers actually prefer listening to and dancing to records played by a DJ, rather than listening to and watching a live band. Times and musical tastes have indeed changed over the last few decades.

The debate about “Are bands better than DJs?” is therefore a bit pointless because in many situations, the people have voted with their feet.

Do you prefer bands or DJs?

Tell me what you think in the comments below.

As an Amazon Associate, I earn from qualifying purchases.

Additionally, MyAudioPlanet.com participates in other affiliate programs, and we sometimes get a commission from purchases made through our links.